Marcelle Machluf, child of a Moroccan immigrant who couldn’t read or write, is looking for investors for what could be a revolutionary tumor drug-delivery platform

Article by Shoshana Solomon, published on Timesofisrael.com on July 8, 2019. 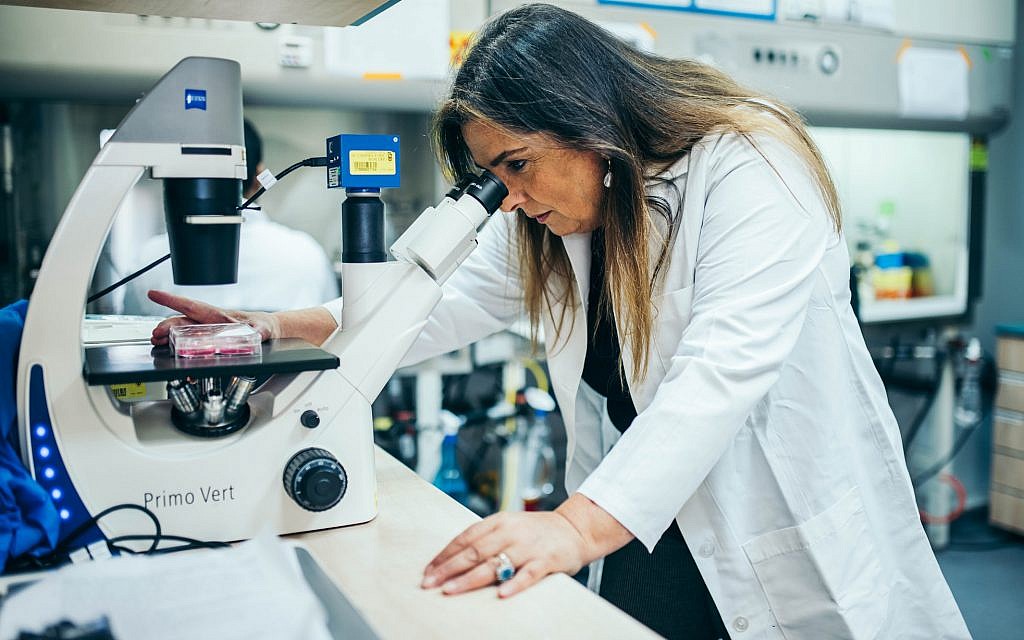 Prof. Marcelle Machluf at her lab in the Technion – Israel Institute of Technology (Courtesy)

When Marcelle Machluf was 16, her chemistry teacher told her she had no chance of succeeding in the field. Little did the teacher know that her student, who used to accompany her Moroccan immigrant mother after school to help her clean offices, would go on to complete postdoctoral studies at Harvard Medical School and then lead the Faculty of Biotechnology at Israel’s Technion-Israel Institute of Technology.

Machluf uses chemistry in her work all the time, she said in a recent interview with The Times of Israel. And in her first year of biology studies, which was almost all chemistry, “I excelled in all the classes,” she said with a laugh, sitting in her office adjacent to the lab she runs at the Technion.

Machluf, 56, dean of the Faculty of Biotechnology and Food Engineering at the Technion, is a globally recognized name in the fields of drug delivery, gene therapy, cellular therapy and tissue engineering. She has published over 60 articles and book chapters, and has seven patents in the process of being registered.

Now, the soft-spoken scientist is on the cusp of perhaps the biggest gamble of her career: the creation of a drug delivery system that she hopes will shrink the deadliest forms of cancer — lung, brain and pancreatic tumors. Animal testing has shown support for her theory, and she is getting ready to take the next step. 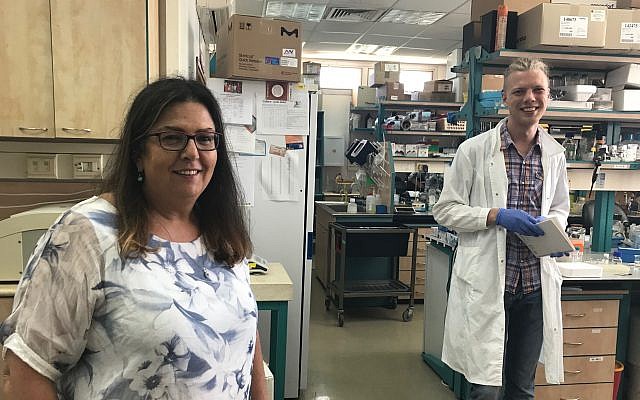 The Technion’s Prof. Marcelle Machluf, left, at her lab in Haifa with a lab assistant, June 19, 2019 (Shoshanna Solomon/Times of Israel)

“The technology is ready and is working in animals,” she said. “Now I am setting up a company to prepare it in industrial clinical quantities to start tests on humans.”|

Machluf is in talks with investors to raise the funds needed to do this, and if she succeeds, she expects to start the Phase I clinical trial in three to four years.

In her work, Machluf and her team at the Technion lab use mesenchymal stem cells. These cells, found in all humans, play multiple roles in the body, differentiating into a variety of cell types. They are also hypo-immunologic and thus don’t provoke an immune system reaction when transferred from one person to another.

Previous research has found that these cells help cancerous cells hide from the immune system, allowing the cancers to thrive and grow to a size that makes it impossible for the immune system to later attack.

“These cells have a big role in what we call modulating the inflammatory response, and a tumor is a big inflammation that cannot be cured,” Machluf said. So these cells, which are “good cells” because they can generate bone, cartilage, fat and other cells, play a deathly role in helping tumor cells grow.

Machluf and her team assumed there must be something in their membrane that allows them to communicate with the tumor and allows the tumor to control them.

“Otherwise why do they stick to the area of the tumor and don’t leave?” she said.

It is this assumption that led them to the development of their new drug delivery platform.

As a first step, the researchers separated the membranes from the cells.

“How do you do that? You kill the cell. You render it a ghost,” Machluf said. “You take the cell and you spill out all of its content… so it is now an empty balloon. And you leave only the membrane.”

These cell-less membranes can interact with the tumor cells, but because they are devoid of an inside, they won’t do what the tumor instructs.

The researchers then loaded these empty membranes with cancer drugs for a variety of conditions and injected them into animal patients.

Once injected into the bloodstream, the “nano-ghosts” were able to “identify the tumor, hook to the tumor and deploy their drug into the tumor cells, and the tumor cannot do anything about it,” Machluf said. 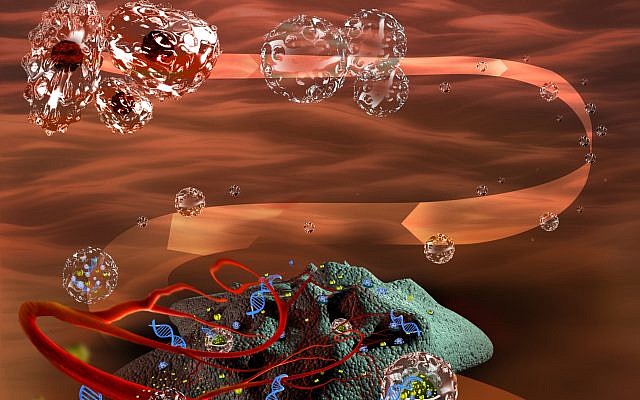 Thus was born a drug delivery system which is a “universal carrier” — it can target multiple cancers at different stages with diverse drugs, which it can release solely into the tumors without affecting surrounding tissue.

The trials were done on four types of tumors in animals, including some cancers that are considered untreatable, Machluf said: pancreatic tumors, prostate and breast cancers, and a very severe form of lung cancer.

The results were impressive. The tumors went down in size with just one shot of nano-ghosts filled with the appropriate drugs, Machluf said. “For each tumor we chose the drug. One injection reduced the size of the tumor significantly, I am talking about 80%-85%.”

For the pancreatic tumor, the nano-ghosts carried a drug that rendered the cancer more sensitive to chemotherapy, she said, thus making it more susceptible to treatment.

Now the team is starting to test the nano-ghost theory on brain tumors in animals, she said.

Last year Machluf was selected to light a torch at Israel’s 70th Independence Day Celebration, in acknowledgement that she is behind “one of the sixty most promising technologies ever developed” in Israel.

“Nothing is impossible,” she said at the ceremony. “Only the sky is the limit.”

In 2018, Technion’s Prof. Marcelle Machluf was selected to light a torch at Israel’s 70th Independence Day Celebration, as being behind “one of the sixty most promising technologies ever developed” in Israel (Muki Schwartz)

Machluf immigrated to Israel from Morocco at the age of one with her mother and grandmother. The three lived in Ashdod, in a 48-square meter apartment (517 sq feet); none initially spoke the language. Her mother, a seamstress, earned a living by cleaning offices and schools and Machluf used to go with her to help after school. After her mother was injured, an 11-year-old Machluf did most of the cleaning work, together with her mother’s friend.

Her mother, said Machluf, hadn’t gone to school and couldn’t read or write, but did everything for her family, from painting the walls of their one-and-a-half-bedroom apartment to bringing in an income. “She cooked and she took care of me,” she said. “She always told me: without education you are nothing. You need to pursue an education.” 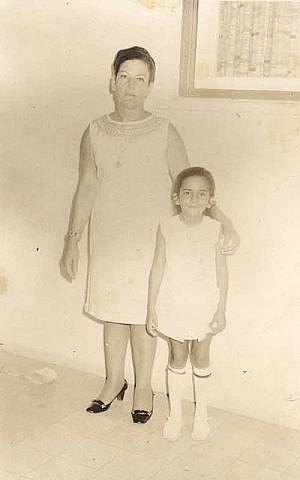 So Machluf invested a lot of time in her studies, but she was also lucky, she said, because she really loved learning. “You need to have the will. Because if you don’t have the will, even if you have all the means, you can’t force someone to do what they don’t want to do. I had the will; I had the motivation.”

Machluf dreamed of being a doctor, but didn’t get accepted to medical school in Israel. So, she opted for biology studies at The Hebrew University of Jerusalem and soon fell in love with the field and the research lab. She went on to earn a master’s degree and doctorate in biochemical engineering at Ben-Gurion University of the Negev and a post-doctorate at Harvard.

Being a female researcher was not easy, she said, and being of Mizrahi — or Eastern — origin, when most of academia was dominated by men of Ashkenazi descent, was even more challenging, she said. Ashkenazi Jews have roots in Germany, France and Eastern Europe; Mizrahi Jews come from the Middle East of North Africa.

Poor odds
Climbing up the career ladder is difficult “because a woman has always the conflicts between family and career,” she said. “And always, when someone gives up on their career, it is usually the women to support their husbands.”

Her husband, she said, a driving instructor, was happy to take the backseat and let her forge ahead in her career.

Though Machluf is confident in her nano-ghost theory, she admits it faces a lot of skepticism in the academic, corporate and research world.

Hers is an”outside-the-box approach,” she said, “not the typical system that everyone is studying” to combat cancers.

Current cancer treatments involve radiotherapy and chemotherapy, usually conveyed via intravenous infusion. The cancer drugs that are available can be extremely effective, but they also cause damage to healthy tissues. Targeted drug delivery has thus become a major thrust of recent research, but existing solutions are limited to certain kinds of cancer at particular stages. Hence a universal carrier for targeted drugs, like that proposed by Machluf, would be a major breakthrough in cancer research.

Many drug delivery researchers use polymers or other substances to carry their medications. These do not necessarily target just the cancer, Machluf said.
Her product, she said, would be a new player in the market with the potential to take “a big chunk” of the existing research market.

Colleagues are calling her research “too good to be true,” she said, and pharma giants like Merck and Teva Pharmaceutical Industries Ltd., to whom she showed her findings, have declined to fund her studies, saying the research is still in very early stages and does not fit their mainstream approach to cancer.

She admits that huge challenges and questions lie ahead. Large numbers of nano-ghosts will have to be produced for the clinical trials, and how the human body will react to these particles is also a huge unknown.

The chances of success for a venture like hers are “very low,” she admits. Much depends on funding and on how much you believe in and push the technology, “regardless of the negative feedback that you get.”

Meanwhile, Machluf has licensed the technology from the Technion and is now looking for investors to start her clinical trials. She is negotiating with venture capital funds and a major Technion donor, Ed Sattell, has donated $2 million to Machluf’s research.

If she gets the money she needs, she will work on creating industrial amounts of the product to use for human trials. In parallel, she needs to figure out which cancer she wants to tackle first and with which drug.

To make this decision, she will assemble a committee of oncologists, clinicians, industrial oncologists and pharmacologists to come up with an answer.

She will not have the money to work on parallel cancer conditions, she said. A clinical trial with one kind of tumor and one kind of drug will cost, just for Phase I of three phases, some $3 million.

“Before investors invest more money, they need to believe. I need to show them this evidence… show them that it works” in humans, she said.