Technion students and professors set aside lectures, books, and exercises for a day, as startup founders, multinationals and VC investors flock to campus to talk entrepreneurship.

Students and professors at Haifa’s Technion — Israel Institute of Technology set aside their lectures, books and exercises for one day last week, as startup founders, multinationals’ officials, and VC investors from the nation’s thriving tech field flocked to the campus, located on Mount Carmel, to talk about entrepreneurship.

Article published at www.timesofisrael.com on December 25, 2019. 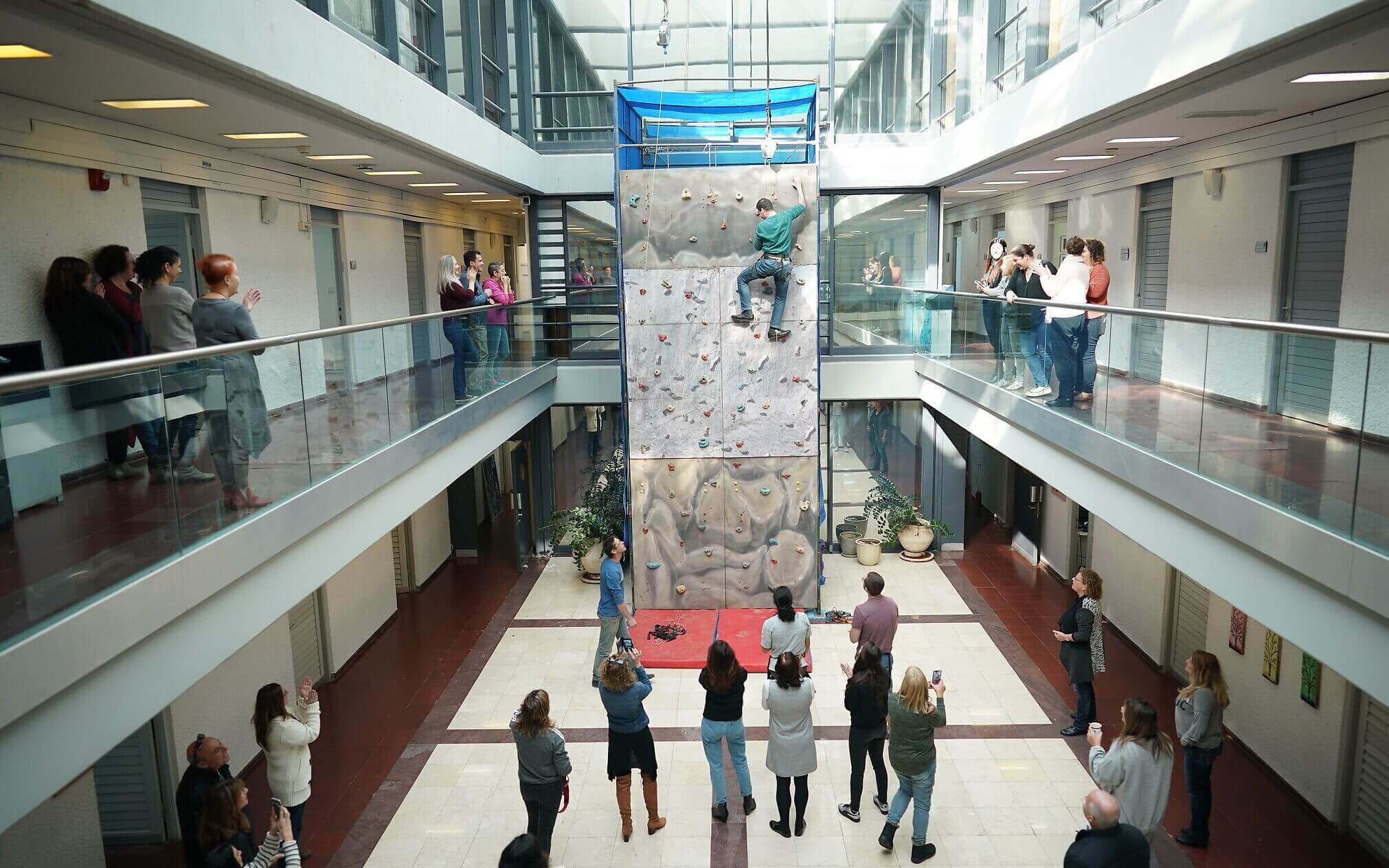 Technion students faced with challenges of entrepreneurship at the Technion, December 19, 2019. (Courtesy)

During the day, students and faculty members huddled at tables around hackathons that aimed to try to find a solution to pressing problems like building site accidents, traffic jams and road crashes, and health challenges, while officials from tech giants operating in Israel, including Facebook, Intel Corp. and IBM.

Dan Ariely, Professor of Psychology and Behavioral Economics at Duke University, a Technion graduate, kicked off the day talking about how behavioural economics can change the world and how to motivate people.

Kfir Damari, the co-founder of SpaceIL spoke about how the startup tried and failed, to reach the moon with their Beresheet spacecraft; Dor Gross of Facebook talked to students about how to Crush their Coding Interview while entrepreneurs from Israeli firms like Mellanox Technologies Ltd. and startups like Taboola talked about how to succeed, grow a firm, and make an exit. 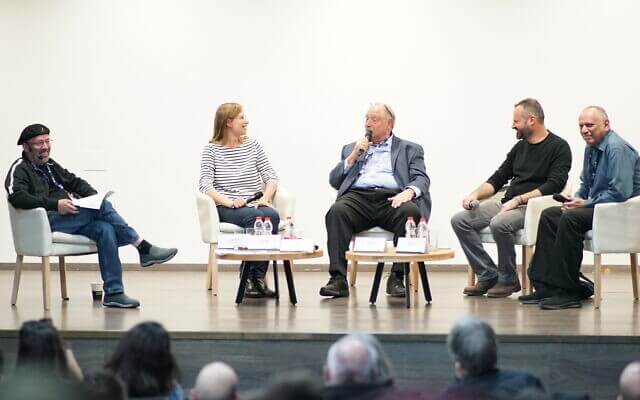 “Which one of you wants to be a startup entrepreneur,” called out tech guru Yossi Vardi to a hall full of students during a panel. A bunch of hands went up in the room. “Which of you have a mother who want you to set up a startup,” Vardi asked, immediately after. This time, hands remained down.

Vardi was part of a panel together with former Intel Israel President Mooli Eden, Dov Moran, the inventor of the disk on key, and Gal Haber, co-founder and managing director of Plus500 Ltd., the maker of an online trading platform, and Lena Levine, the co-founder of Via Surgical, which has developed a medical device to perform sutures in hernia-repair surgeries in a minimally invasive way. All of the participants of the panel were themselves Technion graduates, and they debated the future of the so called Startup Nation and provided words of wisdom to entrepreneurs in the making.

“Make sure you have the right people,” to join your venture, was one of the nuggets — employ people who are modest, not big spenders and don’t have huge egos; finding a mentor to save growth pains of the company was another piece of advice, along with “follow your passion”, as trends come and go; creating a successful startup requires also a bit of luck — so make you are “not sitting on the toilet” when luck comes knocking at your door, was another golden insight. The pros and cons of joining a startup — or setting up your own — or joining the ranks of a large multinational were also debated, with opinions swinging both ways. 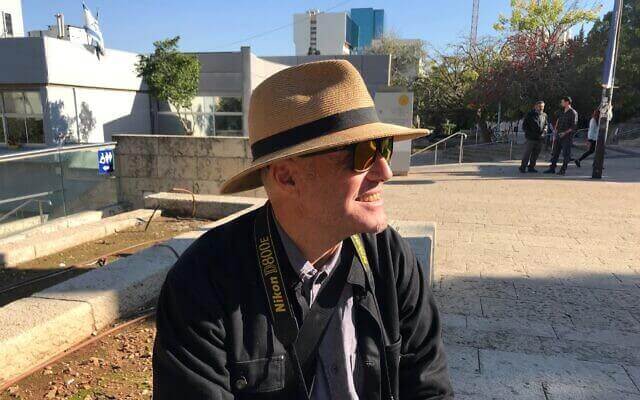 Ezri Tarazi, professor of industrial design in charge of the t-hub entrepreneurship program of the Technion, December 19, 2019. (Shoshanna Solomon/Times of Israel)

The day was organized by the Technion’s “t-hub,” a program set up earlier this year, as part of a national plan to boost entrepreneurship at Israeli colleges and universities.

“We want to create the appetite, the spark,” said Ezri Tarazi, a professor of industrial design in charge of the program and of the entrepreneurship day. “Besides studies, academic institutions must provide the spark of innovation and entrepreneurship.”

Organizations globally today understand that “innovation is an engine” without which they cannot grow, Tarazi said, and those who do not keep up with the pace, cannot survive.

Entrepreneurship can be taught, he added. “Talent can be developed,” he said. “It takes awareness and exercise.” Rather than studying events in the past and how they were resolved, he said, studying innovation focuses on finding solutions to challenges that to date have no answers. “Even the teachers don’t know how to solve the problem,” he said. 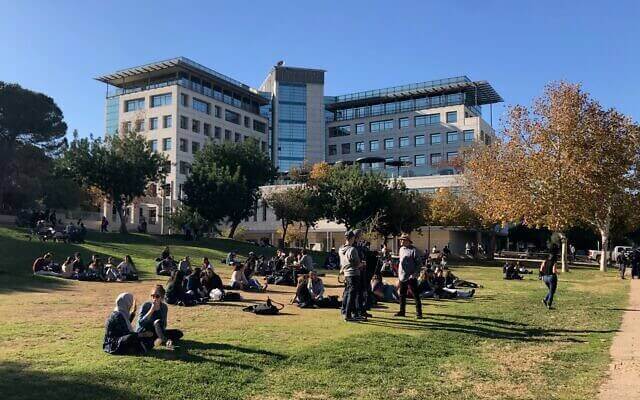 Technion students taking a break on the grass on a sunny winter day when entrepreneurs flocked to the Haifa campus to talk to students, December 19, 2019. (Shoshanna Solomon/Times of Israel)

In Israel, which boasts the greatest number of startups per capita in the world, and sports the nickname Startup Nation, entrepreneurship courses have been sprouting at universities and colleges throughout the country to meet a grassroots demand. These programs aim to arm students with much-needed theory along with a toolbox of mentorships, networking, and tips on how best to approach investors for funding.

The Technion was one of the first universities to recognize this need, Tarazi explained, with Nobel Prize winner Professor Dan Shechtman, world-renowned for his work in chemistry and material science, setting up and running a course on technological entrepreneurship at the Technion for the past 30 years. Now there is a push to deepen these activities, Tarazi said.

The aim of the t-hub is to hold these kinds of days, workshops, and lectures on a regular basis, so that the university not only provides students with the “hard skills” – the deep scientific knowledge they glean from their lectures and classes, but also with soft-skills, like how to write a CV, pitch to an investor, work in a team and how to interview to make it in an ever-changing new world. 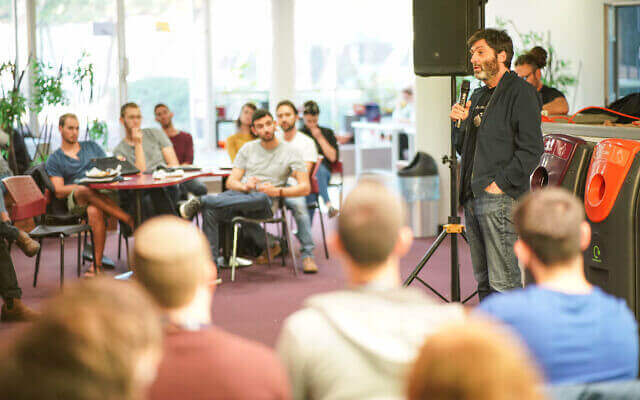 The hackathon about behavioral economics held by Dan Arieli at the Technion, December 22, 2019. (Courtesy)

The university will also be launching, next October, a minor degree in entrepreneurial leadership that can be added to a variety of majors, he said.

Meanwhile, at the construction hackathon, students in hard hats suggested putting up sensors at risky spots on construction sites to help avoid accidents. In the Dan Ariely’s behavioural economics hackathon, students suggested adding a feature to navigation app Waze to alert drivers about bikers on the road, while another group suggested cutting traffic by creating work-sharing spaces on trains, to get entrepreneurs to drop their cars and hop on the wagons.

Luna Karayanni, a 20-year-old second-year computer sciences student was walking around the campus with her friends, taking a break from sessions. She had attended the Crushing your Coding Interview session earlier that morning, she said. The key takeaways she gleaned from the talk were that people need to be honest about their capabilities, and must highlight any significant projects they took part in while studying. She also attended the talk by the SpaceIL co-founder and said it was “inspirational, and very emotional.” 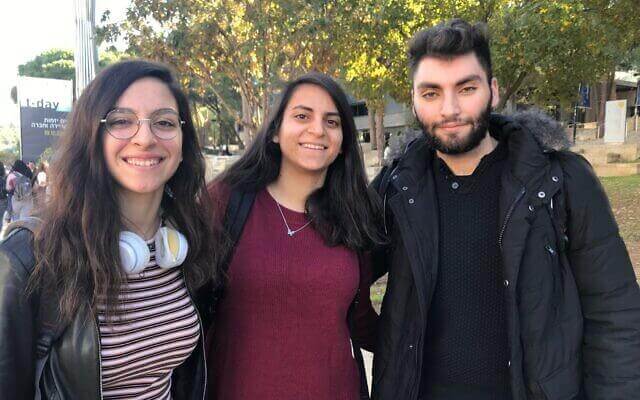 Mais Haddad, her 20-year old friend, who studies bio-medical engineering, said that she also found the SpaceIL talk “motivational” — SpaceIL co-founder Damari urged the students “to believe in ourselves and be good at what we do,” she said. Taking part in the day’s activities was important, she said. “As students, we may know how to get good marks, but we don’t always know how to cope in the workplace.”

Twenty-six year old Idan, who preferred not to give his surname, said that he took part in the talk by Dan Ariely, and then attended the panel with Vardi and the other entrepreneurs. “It’s been an Achla day,” he said, using an Arab word for “awesome.”

“Instead of just studying we have been given many talks and a wide choice,” he said. “It has been interesting.”