Prof. Hossam Haick was handed the EU Innovation Award on Behalf of the SNIFFPHONE Project

Professor Hossam Haick from the Wolfson Faculty of Chemical Engineering receives the “European Commission Innovation Prize” on behalf of the SNIFFPHONE project and partners. The award was handed in Lisbon on November 21, at The European Forum of Electronic Components and Systems (EFECS). This is a great honor rewarding the excellent concept and work that has been done in this project.

The SNIFFPHONE project was established and coordinated by Professor Hossam Haick under the auspicious support of the Horizon 2020 ICT-02a-2014 Program for Smart System Integration, in collaboration with additional 8 partners from additional five countries. 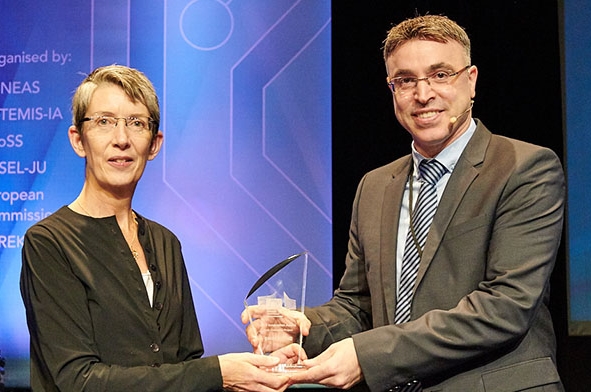 The SNIFFPHONE project aims to reach a diagnostic test that has high-accuracy, low-cost, non-invasive, easily repeatable, effortlessly operated by a lay-person and has minimal impact on the person’s daily activities.

In the SNIFFPHONE project, the partners achieved these requirements by integrating heterogeneous micro- and nano-technologies into an autonomous smart system that can be connected with smart devices and analyze disease markers from exhaled breath. In this approach, an interaction between the breath sample and a miniaturized array of highly sensitive nanomaterial-based chemical sensors can be recorded, stored and pre-processed by integrated miniature on-chip microfluidics and electronics. The relevant electrical signals are then transferred wirelessly via the smart device’s internet to an external server. Statistical pattern recognition methods are applied on the received data and a clinical report including the screening results is sent back to the designated receiver (e.g., specialist, family doctor) when results are positive.

The SNIFFPHONE represents a new concept that addresses major societal challenges in the health and well-being of the general population while accounting for ethical and security doctors. The end-product integrates functionalities that are relevant to the health screening applications with decreased size (x30-40), decreased costs (x150), and increased predictive and cognitive functions. The system provides full autonomy with energy management as well as with operation/use management.

The idea was realized in collaboration with nine partners from six countries. The core technology, containing breakthrough nanosensors for breath analysis, was developed and supported by the Technion team. Nanosensors for defining the breathing protocol were developed and provided by NanoVation-SG Ltd. – a spin-off company from the Technion. The micropump was developed by Cellix in Ireland, fluidics by Microfluidic ChipShop in Germany, and the cloud platform by VTT in Finland. The clinical studies were carried out at the University of Latvia in Riga, with further testing and technical experimentation is done in Austria at the University of Innsbruck. Siemens has taken part in the testing and validation phase of the SNIFFPHONE project and conducted usability studies. JLM Innovation, Germany provides system integration, the device software, the SNIFFPHONE App and algorithms for the measurement system. 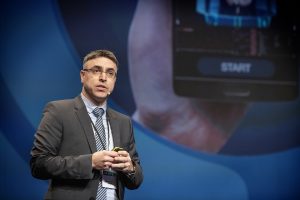 The 2018 Innovation Award was granted on the 21st of November in Lisbon, at the European Forum for Electronic Components and System (EFECS) in presence of EU top-level leadership figures and the Israeli Ambassador in Portugal Rafi Gamzo. Dr. Jan Mitrovics – CEO JLM Innovation GmbH and SNIFFPHONE Partner – who presented in the ceremony was called on stage to join receiving the honor.

Professor Haick serves as a consultant to several commercial companies that spun out of his laboratories at the Technion, and leads three EU consortia, with dozens of contributors from the industry, academia and medical system.  He holds dozens of patents and made it into many lists, including the World’s 35 leading young scientists (MIT, 2008) and the list of 100 most influential inventors by several international agencies between 2015-2018. He won an array of prizes and medals, including “Knight in Order of the Academic Palms” granted by the French Government, The Humboldt Award, The Bill and Melinda Gates Prize and the Herschel Ritz Innovation Award.