Today, January 24, 2020, marks the 55th anniversary of the death of Sir Winston Churchill at the age of 91. Buried in St. Martin’s Church, Bladon just outside the Blenheim Palace grounds north of Oxford, Churchill was honoured at his funeral by an assembly that brought together some of the greatest statesmen in world history.

Article published at www.technion.ac.il on January 24, 2020.

On this anniversary, the ongoing British – Technion relationship was again exemplified by a meeting between HRH Prince Charles and Technion Prof. Hossam Haick in which Prof. Haick showcased cutting edge technology for the rapid detection of cancer through sampling the breath. 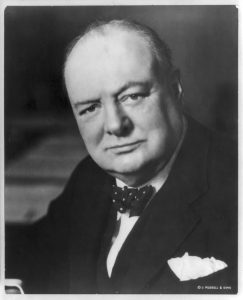 The Technion – Israel Institute of Technology in Haifa had a special connection with Sir Winston Churchill, and the central and largest conference hall on campus was named for him.

British Prime Minister Sir Winston Churchill maintained a close and warm relationship with the Technion, and his descendants have continued to do so. In 1955, his son Randolph Churchill visited the Technion and signed the cornerstone scroll for the Churchill Building. He brought with him a message from his father: “I am very sorry for being unable to attend the opening of the new Technion conference building … You are to be commended for the development of your country’s technological achievements.

Two official letters from Winston Churchill to the Technion’s administration were found in the Technion’s archive. In the first letter, dated November 20, 1954, Churchill – who was then Great Britain’s Prime Minister – thanked the Technion’s administration “for the decision to name after me two buildings on the new campus… I am truly honored that some buildings of the Israel Institute of Technology are to be named after me and that my name will be associated with an undertaking devoted to the advancement of knowledge and human well-being.” 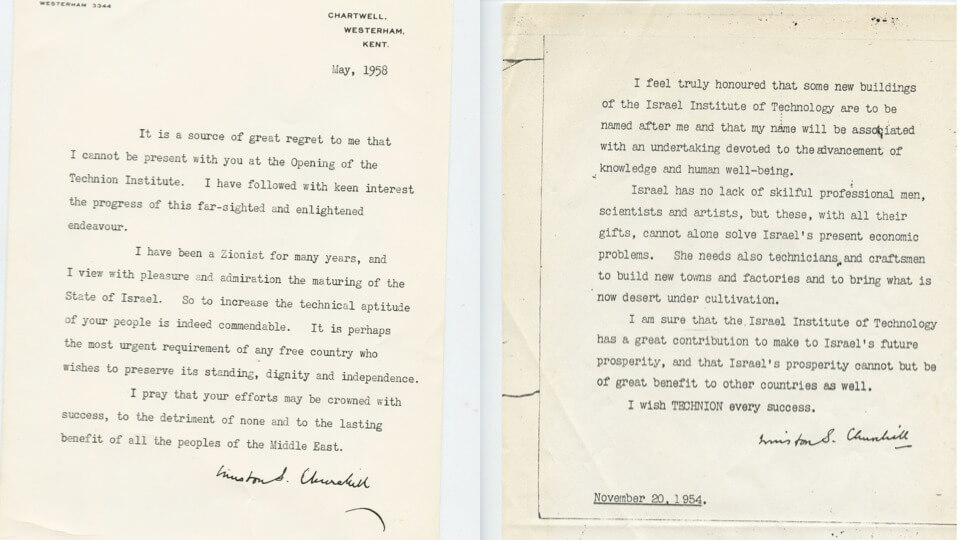 He notes that the Technion is essential to the future prosperity of the State of Israel and that this prosperity will certainly benefit other countries. “Israel has no lack of skil[l]ful professional men professionals, scientists and artists, but these, with all their gifts, cannot alone solve all of Israel’s present economic problems. She needs also technicians and craftsmen to build new towns and factories and to bring what is now desert under cultivation.”

In the second letter, from May 1958, Sir Winston Churchill – who was already a private person – apologizes for being unable to visit the Technion. “I have been a Zionist for many years, and I view with pleasure and admiration the maturing of the State of Israel … I pray that your efforts will be crowned with success to the detriment of none and to the lasting benefit of all the peoples of the Middle East.” He was represented at the inauguration of Churchill Hall at the Technion by his second daughter, Sarah Churchill.

The Churchill Building at Technion – Israel Institute of Technology in Haifa

Two months later, on July 3, 1958, at his London residence, Sir Winston Churchill handed the key to the Technion Hall to Israel’s Ambassador to Britain Eliahu Eilat.

Churchill’s grandson, Winston Spencer Churchill, also visited the Technion and was involved in the restoration of the Churchill Building after it was damaged by a fire. He was awarded a Technion Honorary Doctorate in 1997.