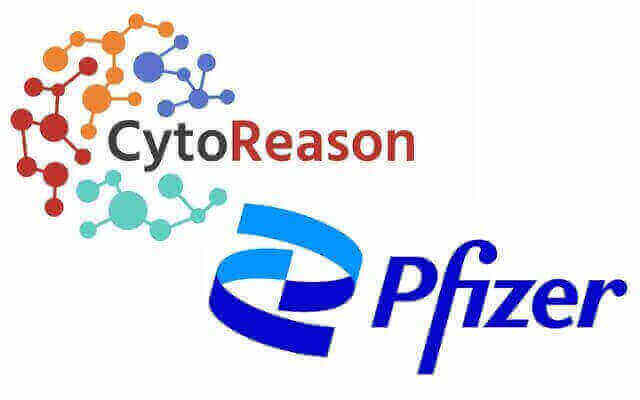 Scientists at pharmaceutical giant Pfizer have long understood that people with various autoimmune diseases often have elevated levels of a protein called CCR6, believed to play a part in a range of conditions from lupus to inflammatory bowel disease.

The Pfizer wizards have developed a compound that in lab tests seems to inhibit the protein, in theory preventing the symptoms and the harmful diseases.

But, as with all potential medicines, figuring out which conditions and which patients the drug could actually help outside the lab would be a long, expensive road of animal trials, human trials and data analysis.

That’s why Pfizer teamed up with Israeli startup CytoReason, an artificial intelligence-powered platform that builds digital models of the human immune system and diseases. Pfizer used those computer models and deep wells of data to quickly narrow down the drug’s possible uses, ultimately figuring out that it would work best to fight ulcerative colitis, a painful condition that affects the digestive system.

“The results we found in partnership with CytoReason supported Pfizer’s decision to begin the clinical development of this drug,” says Mike Vincent, chief scientific officer of Pfizer’s Inflammation and Immunology Research Unit.

Other pharmaceutical giants are also impressed. Six of the world’s 10 largest drugmakers, including GlaxoSmithKline and Roche, are among the multinationals now using CytoReason’s technology to develop hundreds of drugs.

On average, developing a new drug takes a decade and costs $2.6 billion. Less than 12 percent of new drugs actually succeed in gaining regulatory approval, according to data from the Pharmaceutical Research and Manufacturers of America.

The future of drug development is likely to rely heavily on models and data from CytoReason and other computer-aided drug design companies, which could replace lengthy trials and lab work. Research Dive forecasts revenue in the fast-growing sector will grow 15.5 percent annually to reach $4.8 trillion a year by 2026.

CytoReason’s technology can replace some animal trials, allowing scientists to move directly from the lab to human trials. Pfizer was able to bypass tests on mice for its CCR6 research, saving about 18 months – and numerous mice. Someday, the company’s digital platform could be accepted as a more accurate and cost-effective substitute for today’s complex and expensive system of human clinical trials, says David Harel, CytoReason’s co-founder and CEO.

“We are building a digital, computational simulator of the human body that is so accurate it can be used to predict responses to drugs,” Harel says. “Scientists can then take a specific medicine and test it out. This lets scientists see directly how new compounds affect the human immune system. Our disease models do in less than an hour what would take a mouse experiment 18 months. And not only is it faster, it’s better, because the goal, after all, is to help humans, not mice.”

The system is especially timely as the costs of drug development rise, and as medicine becomes more complex and more tailored to individuals. The cost of developing new drugs is becoming so expensive that companies’ costs are beginning to outpace expected returns (see chart). 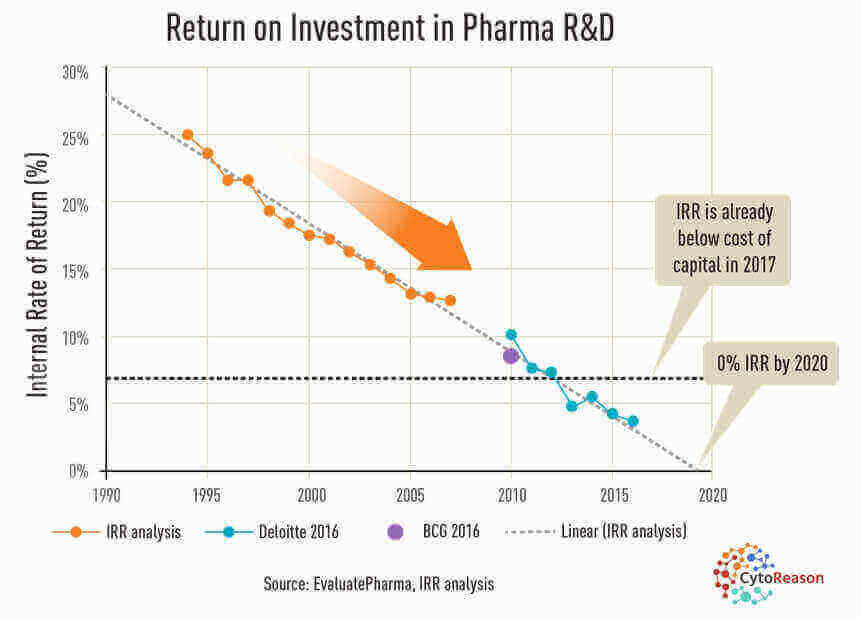 Returns on developing new drugs are being outpaced by rising costs. (EvaluatePharma via CytoReason)

“All the easy drugs have been discovered,” Harel says. “Now we are dealing with developing more complex drugs for more complex diseases.”

As scientists learn more about how each person’s unique makeup affects their response, the process becomes even more complicated, with the potential to tailor treatments to individual immune systems. Harel points to CAR-T cell therapy, which can spur a patient’s immune system to fight cancer, which, although often successful, is extremely expensive because the treatment is different for each patient.

“It’s so good that it’s almost science fiction,” he says. “But things like this, although amazing, make no financial sense to many companies. There are so many potential life-saving treatments to be discovered, but they are too expensive. That’s really not a good place for humanity to be in.”

Instead, to remain profitable, companies make “carpet bombs” that ultimately do not help everyone, and may even harm some patients, Harel says.

While government regulations have long included incentives for pharmaceutical companies to develop drugs for rare conditions, which the US Food and Drug Administration calls “orphan” diseases, these policies are no longer enough as it becomes clearer that different people respond differently.

“Every disease is now an orphan because we now know that every patient is different,” Harel says. “The more precise the medicine is, the better. But we are limited by economics. The whole way of developing drugs needs to change.”

CytoReason, whose technology was initially developed at the Technion-Israel Institute of Technology to build computational models of diseases, is one of the companies leading such changes. It now provides these software-based models of the molecular makeup of diseases to clients, who can integrate them with other data, including studies and trial results, adding their own ideas for new medicines and digital models of those new chemical compounds.

CytoReason’s platform is based on a huge trove of published drug trials, and companies’ internal unpublished data that previously was kept hidden.

AI-powered algorithms quickly sort through and find patterns in the data, constantly improving with use, making the models more effective with time. Such models allow drug developers to alter certain aspects related to the immune system, and efficiently figure out how the same drug may affect different people, or how a certain disease or certain type of individual would respond to a potential compound or treatment.

“Once you have a model, you ask it an unlimited amount of questions, and it can answer those based on the data it’s built on,” Harel says, likening the process to navigating with a mobile app, like Waze, instead of a traditional printed map.

“Running a drug trial with animals like mice is sort of like trying to plan your trip on a paper map,” he says. “You don’t even know if the road is there.”

“We can already see technology and artificial intelligence speeding up and reducing costs of clinical trials,” Harel says. “But only in many years will human clinical trials be eliminated. Our goal is to help drugs get developed faster and cheaper, and to help deliver the best treatments to each patient, ultimately saving and improving lives.”