Innovation in NHS self-care will see patients in England swallow tiny cameras instead of having standard endoscopy.

People will be able to check if they have bowel cancer by swallowing a tiny capsule containing miniature cameras, in an extension of patient self-care.

In what experts described as a trend towards more NHS at-home care, hastened by the Covid-19 pandemic, thousands of people in England will be able to avoid the discomfort of having a camera inserted into their bowel by instead swallowing a capsule the size of a cod liver oil tablet.

Pictures transmitted from inside their body during the painless procedure will help doctors judge whether the person has bowel cancer, the second deadliest form of the disease in the UK.
The boss of the NHS in England said the procedure, known as a colon capsule endoscopy, is an example of “sci-fi” medicine increasingly deployed to improve care. One of the country’s top doctors said the capsules illustrated a major shift of healthcare out of hospitals that will see more and more diagnosis and treatment of illness done at home.

“As we come out of ‘peak Covid’ and the disruption of the pandemic, the NHS is now pushing ahead with genuine innovation to expand services for many other conditions. That’s why we’re now trialling these ingenious capsule cameras to allow more people to undergo cancer investigations quickly and safely,”

“What sounds like sci-fi is now becoming a reality, and as these minute cameras pass through your body, they take two pictures per second, checking for signs of cancer and other conditions like Crohn’s disease.”

NHS England’s trial of the capsules, which are 2cm long, follows its decision last month to send 31,000 women in London a home kit to test for signs of cervical cancer and overcome the awkwardness and discomfort some women feel at having a smear test for the human papilloma virus with a nurse or doctor.

Around 11,000 patients with potential symptoms of bowel cancer will be offered the option of swallowing a capsule as an alternative to having a standard endoscopy. The latter involves an invasive process in which a tiny camera mounted on a thin flexible wire is guided into someone’s body and then around their large bowel, where it takes pictures.

In contrast, colon capsule endoscopy involves the patient visiting a nurse who fits a belt and receiver around their waist under their clothing to capture the pictures, before taking the capsule, going home and using laxatives to clean out their bowel so that the cameras can get clear images. 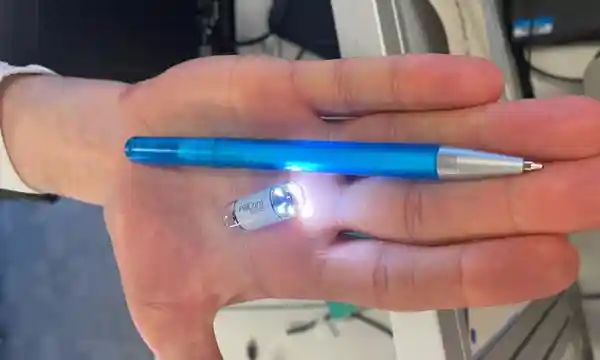 The ‘PillCam’, shown for size reference next to a pen Photograph: NHS England/PA

The process takes five to eight hours. Photographs of the bowel are sent wirelessly from the capsule and later passed on to a cancer specialist to help them decide whether or not the person has bowel cancer, which kills about 16,600 people a year. Patients excrete the capsule when they go to the toilet.

The test is already being used across Scotland. The NHS there has found that most patients tested this way turn out to be cancer-free and do not experience any risks or complications with what they call the ScotCap Test, though the laxatives can leave some feeling sick and dehydrated.

Prof Andrew Goddard, president of the Royal College of Physicians, said: “The future of healthcare should be closer to the home, and indeed that is the vision of the NHS Long Term Plan [for the NHS in England]. As technologies develop, we will see more and more tests that can be done at home, which is great, provided they are accessible by all.

“Regarding colon capsules, we hope this will save some people from having to have a colonoscopy. But they will still need to have bowel preparation, which many say is the worst part of a colonoscopy, and come to hospitals or clinics to be given the capsule and monitoring equipment.”

Prof Peter Johnson, NHS England’s clinical director for cancer, said the latest initiative in at-home care showed the service was fast-tracking new ways of treating and diagnosing cancer. It responded to the suspension of much hospital-based cancer care during the pandemic by delivering chemotherapy drugs to thousands of patients who were unable to have radiotherapy.

“This is just one further example of the NHS embracing the latest innovative treatment options and bringing the NHS home to patients.”

Prof Martin Marshall, chair of the Royal College of GPs, said: “We’re aware that some patients are reluctant to seek help for certain cancers because the diagnostic tests available can be invasive, so this is a fascinating development and we will be very interested to see the results of the trial.

“GPs are preparing for an upsurge in cases of suspected cancer cases post-Covid, and the capsule cameras and new test for cervical cancer are welcome developments that could enable more patients to monitor and manage their own health at home without embarrassment or discomfort.”