Under the auspices of the Helen Diller Center for Quantum Science, Matter and Engineering at the Technion, an interdisciplinary team of scientists has collaborated on groundbreaking research leading to the development of a new and innovative scientific field: Quantum Metamaterials. The findings are presented in a new joint paper published by the prestigious journal Science.

Haifa, Israel September 13th, 2018 – Two teams of scientists from the Technion-Israel Institute of Technology have collaborated to conduct groundbreaking research leading to the development of a new and innovative scientific field: Quantum Metamaterials. The findings are presented in a new joint paper published by the prestigious journal Science.

The study was jointly conducted by Distinguished Professor Mordechai Segev, of the Technion’s Physics Department and Solid State Institute and his team Tomer Stav and Dikla Oren, in collaboration with Prof. Erez Hasman of the Technion’s Faculty of Mechanical Engineering and his team Arkady Faerman, Elhanan Maguid, and Dr. Vladimir Kleiner. The two groups are affiliated with both the Helen Diller Center for Quantum Science, Matter and Engineering; and the Russell Berrie Nanotechnology Institute. 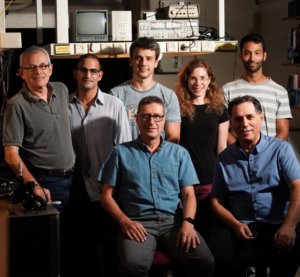 The researchers demonstrated for the first time that it is possible to apply metamaterials to the field of quantum information and computing, thereby paving the way for numerous practical applications including, among others, the development of unbreakable encryptions, as well as opening the door to new possibilities for quantum information systems on a chip.

Metamaterials are artificially fabricated materials, made up of numerous artificial nanoscale structures designed to respond to light in different ways. Metasurfaces are the 2-dimensional version of metamaterials: extremely thin surfaces made up of numerous subwavelength optical nanoantennas, each designed to serve a specific function upon the interaction with light.

While to date, experimentation with metamaterials has widely been limited to manipulations using classical light, the Technion researchers have for the first time shown it is experimentally feasible to use metamaterials as the building blocks for quantum optics and quantum information. More specifically, the researchers have demonstrated the use of metamaterials to generate and manipulate entanglement – which is the most crucial feature of any quantum information scheme. 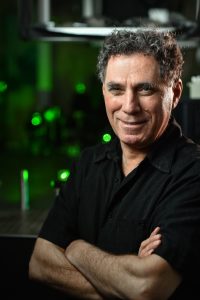 “What we did in this experiment is to bring the field of metamaterials to the realm of quantum information,” says Dist. Prof. Moti Segev, one of the founders of the Helen Diller Quantum Science, Matter and Engineering Center at the Technion. “With today’s technology, one can design and fabricate materials with electromagnetic properties that are almost arbitrary. For example, one can design and fabricate an invisibility cloak that can conceal little things from radar, or one can create a medium where the light bends backward. But so far all of this was done with classical light. What we show here is how to harness the superb abilities of artificial nano-designed materials to generate and control quantum light.”

“The key component here is a dielectric metasurface,” says Prof. Erez Hasman, “which acts in a different way to left- and right-handed polarized light, imposing on them opposite phase fronts that look like screws or vortices, one clockwise and one counterclockwise. The metasurface had to be nano-fabricated from transparent materials, otherwise – had we included metals, as in most experiments with metamaterials – the quantum properties would be destroyed.”

“This project started off in the mind of two talented students – Tomer Stav and Arkady Faerman,” say Profs. Segev and Hasman, “who came to us with a groundbreaking idea. The project leads to many new directions that raise fundamental questions as well as new possibilities for applications, for example, making quantum information systems on a chip and controlling the quantum properties on design.”

In their research, the scientists conducted two sets of experiments to generate entanglement between the spin and orbital angular momentum of photons. Photons are the elementary particles that make up light: they have zero mass, travel at the speed of light, and normally do not interact with each other. 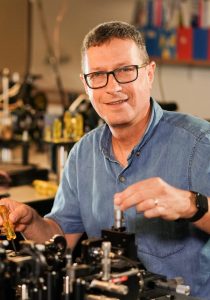 In the experiments, the researchers first shone a laser beam through a non-linear crystal to create single photon pairs, each characterized by zero orbital momentum and each with linear polarization. A photon in linear polarization means that it is a superposition of right-handed and left-handed circular polarization, which correspond to positive and negative spin.

In the first experiment, the scientists proceeded to split the photon pairs – directing one through a unique fabricated metasurface and the other to a detector to signal the arrival of the other photon. They then measured the single photon that passed through the metasurface to find that it had acquired orbital angular momentum (OAM) and that the OAM has become entangled with the spin.

In the second experiment, the single photon pairs were passed through the metasurface and measured using two detectors to show that they had become entangled: the spin of one photon had become correlated with the orbital angular momentum of the other photon, and vice versa.

Entanglement basically means that the actions performed on one photon simultaneously affect the other, even when spread across great distances.  In quantum mechanics, photons are believed to exist in both positive and negative spin states, but once measured adopt only one state.

This is perhaps best explained through a simple analogy: Take two boxes each with two balls inside – a red and a blue ball.  If the boxes are not entangled then you can reach into the box and pull out either a red or a blue ball. However, if the boxes were to become entangled, then the ball inside the box could either be red or blue but will only be determined at the moment the ball in one box is observed, simultaneously determining the color of the ball in the second box as well. This story was initially related by the famous Nobel Laureate Erwin Schroedinger, presenting the scenario of a cat in a box, where the cat is both alive and dead until the box is opened.