New method will shorten the wait for novel drugs, and can lead to development of drugs that would not have been generated by existing methods.

Article by Brian Bloom, published on 20 September 2018 on Israel21c

Developing a new drug can cost billions of dollars and take a dozen or more years to bring to market. Two Israeli researchers have applied artificial intelligence (AI) and deep learning to shave time and money off the drug-discovery process.

Instead of searching for the appropriate molecules to use in a new medicine, as is done today, they enabled a computer to make smart predictions without human guidance.

Shahar Harel and Kira Radinsky at the Technion-Israel Institute of Technology fed into their computer system hundreds of thousands of known molecules as well as the chemical composition of all FDA-approved drugs up until 1950.

Aided by AI, the computer came up with new potential molecules by making sometimes unexpected correlations from within this massive sample.

“We are essentially presenting here an algorithm which addresses the creative stage of drug development – the molecule discovery stage,” Harel explains.

There are between1023  and 1060 molecules that show therapeutic potential. (By comparison, there are an estimated 1022  stars in the galaxy.) The typical drug-development process is shortened by focusing only on those molecules that feature the desired properties. That still leaves an enormous number.

When Radinsky and Harel instructed the system to propose 1,000 drugs based upon old drugs, they were surprised to discover that 35 of the suggestions generated by the system were in fact drugs approved by the FDA after 1950. That proved the system capable of learning to find promising drug candidates.

“What we’ve presented here is not only a means of streamlining existing methods, but also of entirely new drug development and scientific practice paradigms,” said Radinsky, who is an acknowledged data-scientist superstar. 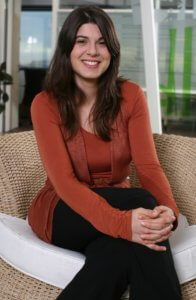 Radinsky received her PhD in computer science from the Technion in 2013 and created a software tool with Microsoft Research head Eric Horovitz that can predict disasters such as the cholera outbreak in Angola. She subsequently founded SalesPredict. (The startup was acquired by eBay in 2016 and Radinsky became eBay Israel’s chief scientist.

Radinsky is also a visiting professor at the Technion. It was through this gig that she developed the system with Harel.

“This new development will accelerate and reduce costs of development of new and effective drugs, thereby shortening the time patients will have to wait for the drugs,” Radinsky said. “In addition, this breakthrough is expected to lead to development of drugs that would not have been generated with the conventional pharmacological paradigm.”