“Hashem made wild beasts of every kind and cattle of every kind, and all kinds of creeping things of the earth. And Hashem saw that this was good.” Genesis 1:25 (The Israel Bible™) 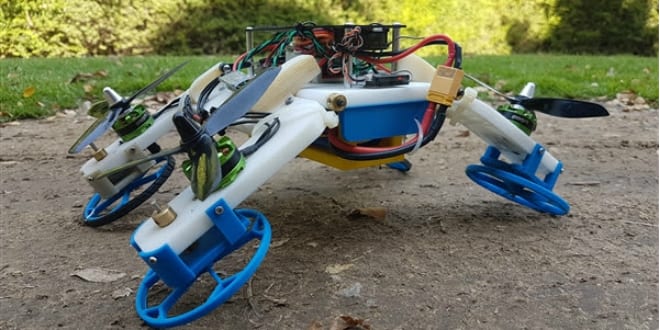 It flies like Superman, crawls through small spaces like a cockroach, delivers packages like your favourite pizza-shop messenger and drives like a Formula One World Champion. The world’s first experimental robot drone that soars into the sky like a typical quadcopter, drives on tough terrain and squeezes into tight niches using the same motors, has been developed by imaginative and skilled researchers at Ben-Gurion University of the Negev (BGU) in Beersheba. 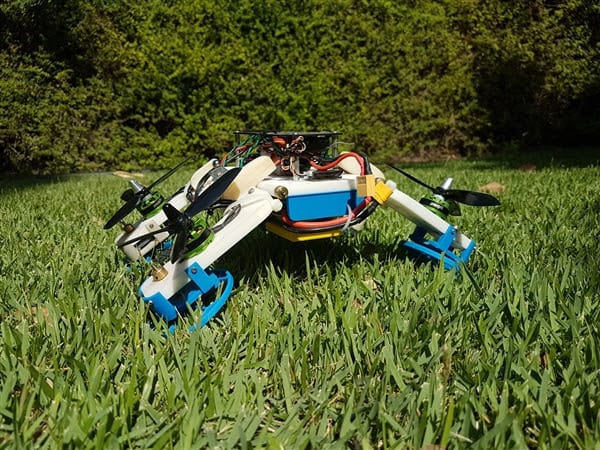 The hybrid FSTAR (flying sprawl-tuned autonomous robot) is due to be introduced at the International Conference on Robotics and Automation 2019 in Montreal, Canada on May 20. It was developed in BGU’s Bio-Inspired and Medical Robotics Lab by Prof. David Zarrouk, a senior lecturer in BGU’s department of mechanical engineering and head of the Bio-Inspired and Medical Robotics Lab, together with his graduate student, Nir Meiri.

The department was among the first established in the nearly 50-year-old university. The first class graduated in 1970, and many of them remained in the Negev to work.

Its research focuses on modelling, designing and manufacturing of unique robots, including miniature crawling robots and serial crawling robots for search & rescue applications, space, maintenance, agricultural and medical purposes. They specialize in designing minimally actuated robots that are easy to control and operate, as well as on modelling the interaction between robots and slippery and compliant environments. Our manufacturing techniques include machining, laser cutting, and 3D printing.

FSTAR can fly over obstacles or run underneath them. The sprawl, which adjusts from a flat configuration to 55 degrees, makes it possible for the bug-like robot to transform its movement from a flying quadcopter to a car-like robot. It also adjusts its width to crawl or run on flat surfaces, climb over large obstacles and up closely-spaced walls, or squeeze through a tunnel, pipe or narrow gaps.

It can run on the ground at a speed of up to eight feet per second (2.6 meters per second). That – combined with low energy consumption using the same motors – makes FSTAR ideal for a broad range of applications that may need a longer work time.

Possible commercial uses are package deliveries, since it can quickly fly to a target zone and then drive using its wheels safely and quietly to reach the recipient’s doorstep. FSTAR can also be used for search and rescue applications as it can fly over various obstacles and crawl between or underneath cracks where a regular drone cannot fly. The robot can also be used for agriculture, maintenance, cleaning, filming, entertainment, law enforcement and anti-terrorist applications.

“We plan to develop larger and smaller versions to expand this family of sprawling robots for different applications, as well as algorithms that will help exploit speed and cost of transport for these flying/driving robots.”. Zarrouk noted.

Zarouk earned his master’s degree in stochastic mechanics and doctoral degree in medical robotics at the Technion-Israel Institute of Technology in Haifa. Between Aug. 2011 and Oct. 2013, he did a postdoctoral fellowship at the biomimetics and millisystems lab at the University of California at Berkeley, working on miniature crawling robots. He received many prizes for excellence in research and teaching, including a Fulbright fellowship, Fulbright-Ilan Ramon postdoctoral Fellowship, Hershel Rich Innovation award and an Alfred and Yehuda Weisman prize for consistent excellence in teaching.

His research was supported in part by the Helmsley Charitable Trust through the Agricultural, Biological and Cognitive Robotics Initiative (ABC Robotics) and by the BGU Marcus Endowment Fund. The Marcus legacy gift, of over $480 million, was donated in 2016 to American Associates, Ben-Gurion University of the Negev by Dr. Howard and Lottie Marcus. The donation is the largest gift given to any Israeli university and is believed to be the largest gift to any Israeli institution.

The ICRA conference is bringing together the world’s top researchers and most important companies to share ideas and advances in the field. Many of the most important developments in robotics and automation have historically been first exposed at ICRA, and 2019 will take this trend one step further. As the practical and socio-economic impact of our field continues to expand, the role of industry-centered activities has grown and will be a critical aspect of the meeting.