Parkinson’s disease is a progressive neurodegenerative disorder that affects dopamine-producing neurons in a specific area of the brain called substantia nigra. Parkinson’s symptoms include tremor, loss of smell and neuropsychiatric problems. However, many people aren’t diagnosed until their disease is well-advanced. Now, a team of scientists at Technion – Israel Institute of Technology has tested a device to detect early-stage Parkinson’s disease from the breath of patients. 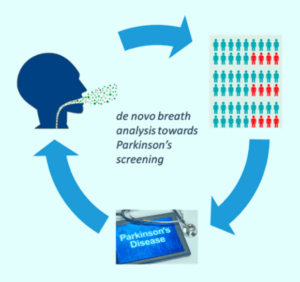 Early diagnosis of Parkinson’s disease is important because it affects the choice of therapy and is subject to a relatively high degree of error. Image credit: Finberg et al, doi: 10.1021/acschemneuro.8b00245.

About 60,000 Americans are diagnosed with the movement disorder each year. But by the time most people experience symptoms, they have already lost many of the dopamine-producing neurons affected by the disease.

To this end, Technion researcher John Finberg and co-authors previously developed a device with an array of 40 sensors based on gold nanoparticles or single-walled carbon nanotubes.

Each sensor had a different chemical attached that could bind certain volatile molecules in the breath, and this binding changed the electrical resistance of the sensor.

The device detected differences in the exhaled breath of people already being treated for Parkinson’s disease and healthy controls.

Now, the team wanted to see if the device could detect differences in the breath of patients with early-stage, not-yet-treated Parkinson’s disease.

The scientists tested the device on the exhaled breath of 29 newly diagnosed patients who had not yet begun taking medication for their illness.

When comparing the sensor output to that of 19 control subjects of similar age, they found that the array detected early Parkinson’s disease with 79% sensitivity, 84% specificity and 81% accuracy, which was better than a diagnostic smell test and almost as good as an ultrasound scan of the brain.

“Although the device needs to be improved and validated by larger studies, it has potential as a small, portable system to screen at-risk individuals without the need for highly-trained specialists,” the researchers said.

The team’s results appear in the journal ACS Chemical Neuroscience.