Aimed at using scientific knowledge to improve sports performance, the First Scientific Conference of the Israeli Olympics Sports Research Center was held recently at Technion. Among the attendees were leading researchers and scientists, senior coaches from Israel and members of the sports-tech industry, and guest lecturers from the USA and England.

Article by Kevin Hattori, published on American Technion Society on May 22, 2019. 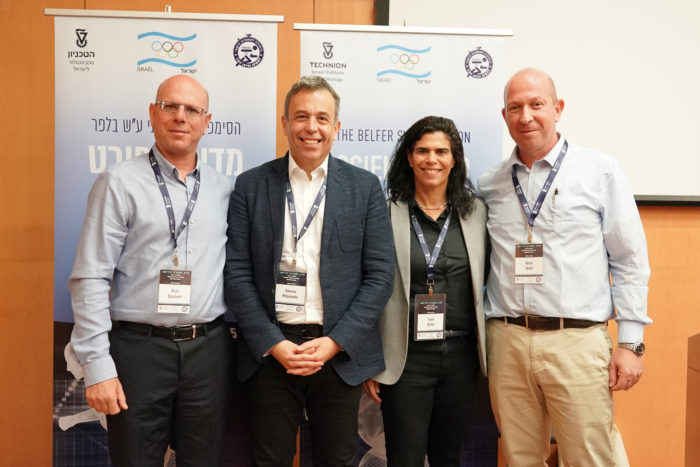 The conference was held at the Technion Faculty of Mechanical Engineering on May 15, as part of the Annual Belfer Symposium. It marked a new cooperative venture between the Technion and the Olympic Committee of Israel.

The Israeli Olympics Sports Research Center, which is focused on applied research for advancing Olympic Sport in Israel, is headed by Professor Alon Wolf of the Faculty of Mechanical Engineering, and directed by exercise physiologist Muli Epstein, scientific director of Israel’s Olympic Committee and its Elite Sports Unit.

Among the discussions related to scientific and technological challenges in the field of athletic achievement was the challenge of breaking the two-hour barrier in marathon races. Running a marathon in less than two hours is more than just a physiological challenge, and new developments in the field of footwear and nutrition could help break the elusive two-hour mark. Experts agree that it is possible to beat the record, and many believe that Kenyan Olympic runner Eliud Kipchoge could achieve do so in the near future.

Prof. Yannis Pitsiladis, an expert in sports and exercise science at England’s Brighton University and a world expert on the genetic and environmental effects of athletic performance, spoke about the enormous challenge of breaking the two-hour barrier in a marathon.

“The borders are not fixed, and by investing time and energy, they can be extended,” said Prof. Pitsiladis. In order for the goal to be reached, there must also be cooperation among researchers in various fields, including nutritionists, biomechanics and data scientists. “We need to develop tools with which to inject carbohydrates into the runner’s body effectively, and to provide him/her with intelligent sensing systems that monitor physiological variables and provide feedback on his/her condition in real time.”

Dr. Alison Sheets is a senior biomechanics researcher at Nike, whose research focuses on the biomechanical mechanisms that limit the performance of athletes through experimental and computational approaches. Her lecture addressed the contribution of equipment innovation in improving athletes’ sports performance.

“Why can’t I run faster, why can’t I jump higher? These questions keep me awake,” said Dr. Sheets, who seeks to improve the athletic performance of the super athlete. Established in 1980, Nike’s Biomechanics Laboratory’s goal is to develop ways to overcome existing limitations and enable athletes to improve their achievements while reducing injuries. “Since the 1980s, tremendous scientific developments have taken place, including the power of computing, data science and 3D printing, which give us new tools to combat sporting challenges.”

Prof. Wolf said that the research center was designed to promote Israeli sports on three levels: the physiology of the individual athlete, the technology of the equipment, and the interaction between the two. During the conference, Prof. Wolf and Mr. Epstein presented a fascinating talk about the history of scientific research in Olympic Sports and the current challenges in the field.

“With this joint cooperation between the Olympic Committee and Technion, a leading body in science and technology,” said Gili Lustig, CEO of the Olympic Committee of Israel, “I have no doubt that together, we can improve the training patterns and physiological tracking of our athletes and thus lead them to new heights.”

“The cooperation with Technion is at one with the quantum leap in the goals that we have set for ourselves,” said Yael Arad, Israel’s first athlete to win an Olympic silver medal and board member of the Olympic Committee of Israel and Chairman of the Sports Committee. “If we have so far aimed at returning from any Olympics with one or two medals, now we want to achieve more. Not only to be good but to be the best. And for that we have to focus on things that we are not good at, and to improve and bring measurable results, and in short – more medals. It is a long-term process whose benefits will be seen only at the 2024 Olympics and perhaps even later. But it will happen if we will be patient, determined and consistent.”

Following the conference, four Israeli Olympic trainers presented challenges from their respective fields to researchers at the new center. Niv Libner, coach of Israel’s women’s cycling team, is seeking to develop tools to improve training and decision-making in training and races. Rogel Nahum, who represented Israel three times in triple jumps in the Olympic Games, said that these areas are desperate for tools to improve the accuracy of running and hitting the jumping board. Sailing coach Gur Steinberg is seeking to develop precise methods for measuring distances and learning how world-champion sailors succeed. And Claudia Laciga, coach of the Israel Beach-Volleyball Team, said the players need tools that will improve their ability to read the opponent and his intentions.