The Olympic Committee of Israel and Technion have established a joint research center to advance Olympic Sports in Israel to be headed by Prof. Alon Wolf, Technion Faculty of Mechanical Engineering

The Israeli Olympic Sports Research Center aims to encourage studies that will enhance Olympic sports in Israel in line with US and European models.

Yigal Carmi, Chairman of the Olympic Committee of Israel said, “The (joint) establishment of the center will position Israel in an advantageous position over our competitors in world sports with regards to scientific knowledge and technology. The fields of biomechanics, motion analysis, and technological development are areas of application that will now receive special attention so the performance of our athletes can be improved. The Olympic Committee of Israel welcomes and acknowledges this strategic cooperation with Technion, which involves the fusion of brilliant scientific minds for the benefit of Israeli Olympic sports. We are certain that this will push our sports performance forward.”

Technion President Prof. Peretz Lavie welcomed the establishment of the new research center and said, “The cooperation between the Olympic Committee of Israel and the Technion is exceptional and very promising. This link between Technion scientists and leading Israeli athletes will upgrade human performance and ensure future achievements.” 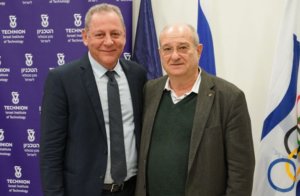 Yigal Carmi, Chairman of the Olympic Committee of Israel (on the left) and Technion President Prof. Peretz Lavie

The joint research activity has already begun. The center’s first research goal is related to windsurfing. Gur Steinberg, who coaches the Israeli windsurfing team, and Yair Talmon, Scientific and Technical Coordinator of the competitive sports unit, targeted as their first goal to research surfer/ surfboard compatibility in order to provide the athlete with best performance ability.

Steinberg explained that a certain surfboard model can have various types of fins and this can make a difference in the athlete’s performance. This difference requires each surfer to examine and test the selected fin over time, but this takes much effort and sometimes even causes the fins to break.

Steinberg and Talmon’s initiative led to a Technion study named, ‘The Mechanical Signature of Olympic Surfboard Fins,’ which makes it possible to differentiate accurately among the various fins and adapt them optimally to the surfer. The research was conducted at Technion’s Material Mechanics Center Faculty of Mechanical Engineering, headed by Prof. Daniel Rittel, and with the scientific support of Prof. Nitai Drimer and Prof. Alon Wolf who is also the Head of the Laboratory for Bio-Robotics and Biomechanics. Prof Wolf’s research encompasses many areas, including robots used for surgery, rehabilitation and rescue and recovery missions; the study of the mechanics of the body; and the development of technologies to improve the motor function of healthy and sick people. 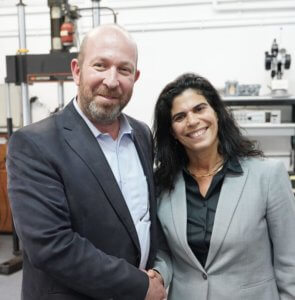 “Very often we see that a fraction of a second or a few centimeters determine whether a competitor will win a gold medal. This kind of advantage is the result of scientific understanding and its implementation in training and equipment. We believe that if we implement the knowledge and capabilities that have made Israel the Start-Up Nation that it is today, into Olympic sports, we will be able to advance the achievements of our Olympic athletes and help them become role models whose achievements will infiltrate into Israel’s sports culture,” Prof. Wolf said. 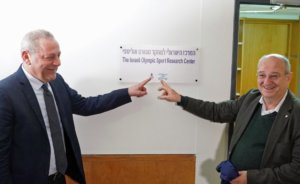 The Olympic Committee in Israel is an umbrella organization for Israeli sports, one that brings together all the Olympic branches and represents Israel in the International Olympic Committee. Its main function is to ensure the optimal preparation of the athletes in Israel’s delegations to the Olympic Games and other competitions.

The new agreement was signed by the Olympic Committee in Israel, the Technion and the Technion Institute for Research and Development. The strategic agreement for the establishment of the new Israeli Olympic Sports Research Center was initiated following a seminar held at the Technion for Olympic sports coaches and in recognition of the need for extensive and in-depth research on various aspects of sports.